Voyager 21.10 GE come with the Gnome 40 and Improved support for AMD GPUs 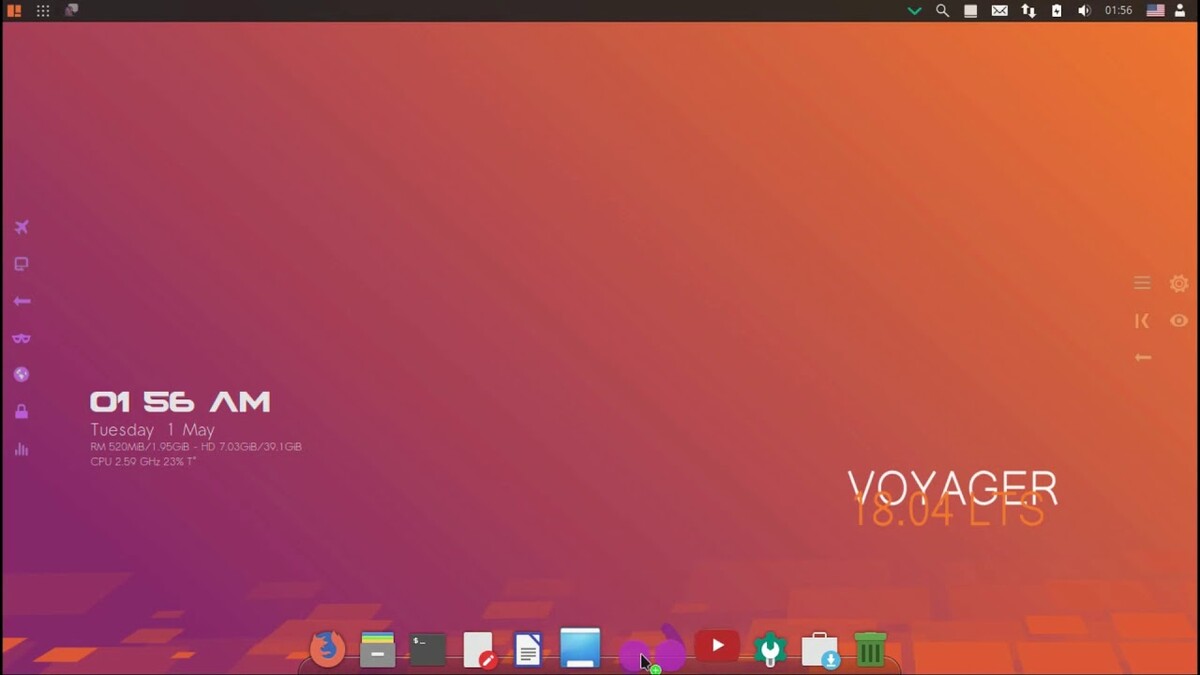 Voyager 21.10 GE with the Gnome Shell desktop version 40 by introducing new features, support for new systems and new technologies and a whole new layout with visual , for applications and virtual desktops. Improved support for AMD GPUs. A new security module called Landlock with the promise finally realized, to have a light, fast, modern, fluid, secure and efficient Gnome system in a hybrid environment for PC and Tablet. This version is based on the Linux 5.13 kernel and the Ubuntu distribution"Impish Indri". 21.10 is an intermediate version with 9 month update that prepares the future 5 year LTS - Long-term support - version which is coming soon. With integrated, options like Conky Control , Repair , Switch Ubuntu , Wine-staging and Steam Gaming in the Box Voyagerand 39 Gnome extensions selected according to PC needs.

This version is based on the Linux 5.13 kernel and the Ubuntu distribution"Impish Indri". 21.10 is an intermediate version with 9 month update that prepares the future 5 year LTS - Long-term support - version which is coming soon. With integrated, options like Conky Control , Repair , Switch Ubuntu , Wine-staging and Steam Gaming in the Box Voyagerand 39 Gnome extensions selected according to PC needs.

Voyager comes in 2 desktop versions, with XFCE by default and Gnome Shell for this version called GE . XFCE is only offered in the LTS version. Also you can choose according to your wishes and machine capacities. The general idea of Voyager, is to introduce into Gnome shell preinstalled Gnome extensions and scripts grouped in a Box which optimize the system with a choice of necessary software. All in a redesigned ergonomics. Warning, Voyager 21.10 is just an advanced variant of Ubuntu, for which I would like to thank the whole team, for this excellent basic work, which allows us to use their system which I always find so simple and well thought out. house is left by default, to avoid any problems of safety and packages and all updates from the official repositories of Ubuntu . From now on, even with an NVIDIA video card, the default session will use Wayland. But it is always possible to select X.org before connecting to its session… It is also an international versionbecause all languages and translations have been kept.

The distribution Voyager based on Ubuntu 21.10 will cycle 9 months before the next LTS with supports and updates. For information, are intermediate versions that prepare the Future LTS. You can then switch to 21.10 without any problem with the automatic update system and so on until the next LTS.

Voyager GE is not a distribution with its repositories but a customized variant of Ubuntu as mentioned above, with all its official repositories. The Voyager project share exactly the same base, common software, the same APT repositories, the same code name and the same development cycle.