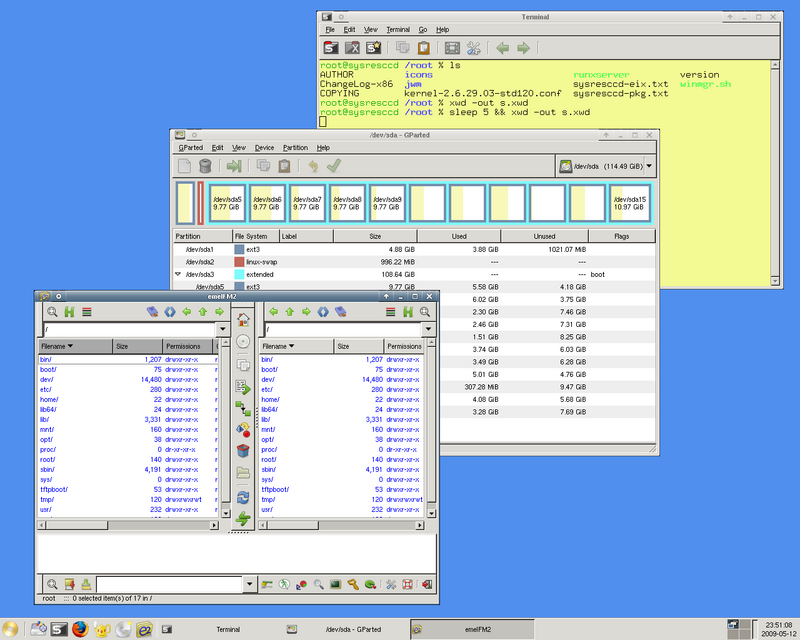 SystemRescueCd is a Linux system on a bootable CDROM for repairing your system and your data after a crash. It also aims to provide an easy way to carry out admin tasks on your computer, such as creating and editing the partitions of the hard disk. It contains a lot of system utilities (parted, partimage, fstools, ...) and basic ones (editors, midnight commander, network tools). It aims to be very easy to use: just boot from the CDROM, and you can do everything. The kernel of the system supports most important file systems (ext2/ext3, reiserfs, xfs, jfs, vfat, ntfs, iso9660), and network ones (samba and nfs). Available in French, English and with a Linux speakup option for the blind. SystemRescueCd is based on the Gentoo LiveCd. Version 0.3.3 was released March 1, 2007. SystemRescueCD 4.5.4 was released July 13, 2015.

Most important changes provided in each SystemRescue 9.00 version. It only shows changes in the versions of the Linux kernel and relevant utilities. Updated the kernel to the Long-Term-Supported linux-5.15.14 The new kernel brings the ntfs3 module... Detalii...

SystemRescue (also known as SystemRescueCd) is a Linux system rescue toolkit available as a bootable medium for administrating or repairing your system and data after a crash. It aims to provide an easy way to carry out admin tasks on your computer, such as creating and editing the hard... Detalii...